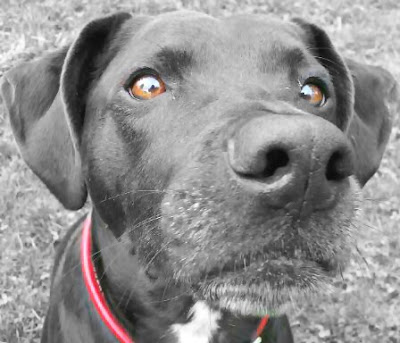 Zoey Maria was found living in a pizza box after Hurricane Katrina in New Orleans and was taken home only to find that she had fleas, worms and a passion for destruction. At 4 months old she annihilated an entire couch in one day, right down to the staples. But, she was loveable anyways.

Zoey’s internal monologue is set to the voice of Rosie Perez. She is a world traveler, an aggressive cuddler, a fierce insect hunter and hater of cats and nail cutting. Her best friend is a rubber lady bug that she carried home from the park, she loves to eat things off the street and when she’s feeling particularly wily, she’ll kick up her leg and pee like a boy. If you need a laugh, give her a stack of pillows and watch her arrange them into a bed or stare at the white patch on her chest until it starts to resemble a flattened squirrel.