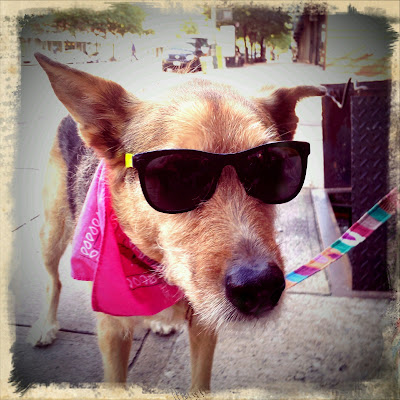 At just 10 1/2 weeks, Guadalupe "Lupe" rescued her first human, Blake, from the CACC (Center for Animal Care & Control) in East Harlem.  She continued her human rights efforts in the aftermath of September 11th, delivering supplies to the triage center at Chelsea Piers and comforting the friends and family members who lost loved ones from her stoop across from the 26th Street Armory.  After a long layover in Texas (to allow her rabies anti-virus test to develop) she joined her human in Australia, where she did a stint in quarantine, then got out in time to be in Blake's wedding as the ring-bearing-flower dog.  She is the only canine who received special permission from the City of Sydney to be allowed in the Sydney Botanical Gardens for the ceremony.  Alas, the marriage didn't take, and Lupe is now an ex-dog...However, she remains close to her former human and occasionally Skypes him...She repatriated along with her original human, Blake--first to Texas, then to Los Angeles.  Lupe has now returned to the beloved streets of NYC from which she came!

Lupe has participated in numerous peace marches and AIDS Walks, has ridden shotgun on many road trips, and has friends throughout the world.  She has supported her human during a terrorist attack, immigration, marriage, divorce, at least 4 earthquakes (including the one in NYC) and, more recently, a hurricane.

At age 13, she encourages younger pups to "Look beyond people's bad behavior and into the eyes of each and every human being.  You will see a soul in need of rescue!"...